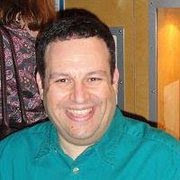 David, my Database Administrator colleague, had some idea of what it is like to be singled out for bullying by a manager. Before joining the university, David had suffered a measure of bullying by one of his bosses while he worked at Prudential UK in Stirling.

He worked 18 hours a week at the university, and this allowed him to spend time on other interests. He worked in radio as a DJ on Central FM, and sat in on Council related meetings in Stirling on a voluntary basis, such as Mercat Cross Community Council, Stirling Boys' Club and Stirling City Heritage Trust. He portrays himself as public spirited; a man who uses his time to benefit the community. You would certainly think he would stand up for justice and what's right.

Kathy McCabe had been bullying me for some time before I was even aware of the term Workplace Bullying. Before that, I thought bullying only happened in the playground at school. The first effect it had on me was that I couldn't sleep. I'd spend most of the night worrying and thinking "Why is she doing it, and why has she chosen me to do it to?" We had got on fairy well, and she could always rely on me with any work, and I required almost none of her time. For about seven years I had sacrificed about 15 hours of my own time every week to ensure everything ran smoothly. I thought that I would have been the last person she would ever want to bully. However, I think it's for that very reason that I became her target.

To help get some sleep and reduce the intrusive thoughts, I increased my alcohol intake until I was eventually drinking more than a litre of whisky a day. I used to do a lot of running, but I had to give that up. When you're running, there's nothing to do but think. Playing squash was much easier because my mind was forced to concentrate on the game. Eventually I had to give that up too. Gaps between points were being filled with unpleasant thoughts. I gave up dancing too when it began to feel as though I was trapped. I only felt safe dancing with Ruth. If I sat down for a rest, I'd immediately be approached by a woman. It would be extremely rude to turn down a dance, so I'd feel trapped dancing and hating every second of it, and as soon as it finished, I'd need to grab hold of Ruth before any other woman came for me.

During the time I was suspended from work, I began to hyperventilate, and there were a couple of panic attacks. There were also a couple of times when I was outside and everything sounded much louder than normal, and it made me feel extremely uncomfortable. I literally had to run home with my hands covering my ears. For a while, I only felt safe at home.

One day I suddenly realised that I hadn't eaten for more than three days; yet I wasn't hungry.

It was effecting Ruth too. Once she said she was feeling overcome with worry. Half an hour later, she passed out. She had to spend the rest of the day in hospital.

Just as she had done a few times before, Jackie O'Neil screamed at me in the office and slammed her hand on her desk in anger. This was because a job she was working on failed, and she wrongly thought that I was to blame, when in fact, she was to blame. David was standing right next to us at Jackie's desk. He was also with me when I informed Kathy McCabe that Jackie had screamed at me again. Jackie had spoken to Kathy about it, and had told Kathy that she had to work till 10pm that night because of the failure. David told Kathy that the failure would have only held Jackie up for a short time. I then confirmed this in an email to Kathy who then passed my email to Mark Toole. Mark offered to arrange a meeting with me and Jackie to discuss the matter. I accepted, but that meeting never took place. Instead Jackie made a malicious complaint against me. She insisted that I was to blame for the failure, and denied that she had screamed. I had told Mark that David had seen the incident, and Jackie confirmed this. Mark carried out an investigation, but deliberately avoided speaking to David. He then instructed Graham Millar to carry out a formal investigation. Graham, who is an arse licker, carried out a fake investigation, and avoided speaking with David too.

Mark wrote to me to say he was arranging a disciplinary hearing. I wrote back saying it was obvious that by failing to speak with David or any one of about a dozen witnesses who had heard the incident that he had already made his mind up to dismiss me. If it had been a genuine mistake by the investigators, they could still have spoken to David. It wasn't a genuine mistake.

I had been suspended from work and wasn't allowed to speak to colleagues. So Ruth phoned David, and David confirmed what had happened. He said that Jackie had been very angry and shouted at me. He also confirmed that he hadn't been interviewed for the disciplinary investigation. He was very clear on all of this, and he had no problem recalling it. You wouldn't expect him to have forgotten, because thankfully it's not every day that you get screamed at by a colleague sitting four feet from you, and we had talked about it afterwards, and again with Kathy present. David had also discussed it with Eric. And you wouldn't forget being interviewed as part of a disciplinary hearing in a hurry. Ruth asked him to confirm this in an email, and he said he would send it to me that same day.

By the following day, we still hadn't heard from him. I began to worry because I knew that he had let me down very badly before during the role evaluation process. I had included a statement in the role description about planning. As full time DBA, our roles differed in that I would receive the work and would plan and allocate it between us. I checked with David that it was okay to include it. He agreed enthusiastically, saying it's what happens so we have to include it. I checked with him again two more times, including just before our meeting with Kathy to verify our description. He assured me it was absolutely fine and told me not to worry. During the meeting, Kathy challenged David about it, and he immediately backed down and agreed to take it out; making me look foolish.

I feared that David was going to let me down again, so Ruth sent him an email confirming what he had said on the phone. He couldn't deny saying it because I had been listening in when he said it. The following day, David wrote to us, and my heart sank as I read his email. He was now claiming that when he spoke to Ruth, he was tired and stressed. He was retracting his statement, and was now giving a different, false version of what took place. In his new version, Jackie wasn't "very angry", she was just frustrated; she didn't shout, she just raised her voice. In addition, he could no longer remember if he was interviewed for the disciplinary investigation. He did this knowing that Mark Toole was trying to dismiss me unfairly, because Ruth had told him. He also did it knowing that about a dozen people had witnessed what really happened. 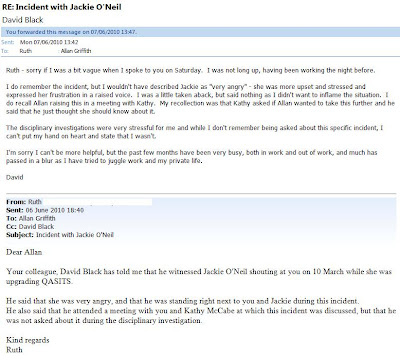 When David clicked his mouse to send that email to me, he knew that he was damaging me just as though he was pounding on an open head wound with a baseball bat.

By lying, David has put himself in a situation where his account of the incident makes no sense. He remembers clearly, almost word perfect, what I said to Kathy. He knew that I wasn't trying to get Jackie sacked. He can recall what I said, so is he now saying that I told Kathy that Jackie had spoken to me in a raised voice? Hardly likely! Or is he saying that I dishonestly told Kathy that Jackie had shouted at me again and slammed her pen on the desk, and that he didn't correct me? There is no doubt that we were talking about the same incident because he took part in the conversation.

He knew that Jackie was dishonestly trying to get me sacked, and he was happy to let that happen. David isn't a boy in short trousers. He's a 42 year old man. 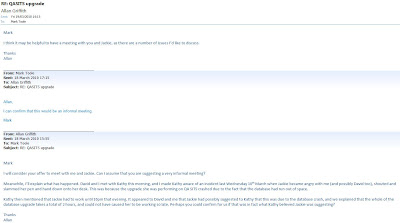 The telephone conversation he had with Ruth lasted 11 minutes and 44 seconds, and they discussed nothing but that incident with Jackie and my general situation. He even expresses his fake concern for me.

Is he going to claim in court, that when he told Ruth that Jackie shouted at me, he was asleep for that 11 minute and 44 second period?

What a mess he has managed to get himself into. I hope his sister and parents come along to the hearing and watch him in action.
Posted by Allan at 01:54

I know David Black well and in my business I am a security consultant working with UK Gov and many industries across the UK. I also work closely with my solicitor clients as an expert witness and to provide evidence for investigations.

I notice that you have added David's home address to the blog posting.

Whilst I understand your intentions to vent on the blog; adding personal data details of your colleagues potentially opens them up to be victims of financial crime. It also leaves you in a difficult legal position should a court find any of the blog statements to be untrue.

I would suggest strongly that you remove identifying information like that. e.g. have you included your own name and address on this blog? no, of course not.

My full name is plastered all over my blog.

David's dishonest behaviour has helped to deprive me of my livelihood, so forgive me if I am not overly concerned if he
becomes a victim of financial crime.

The whole point of this blog is to clear my name, expose the corrupt, and to deter further corruption. I have offered the corrupt an opportunity to contact me if I've said anything that they disagree with. They haven't; because it's all true. When you next speak with David, please ask him for his current version of events, and let me know what he says.