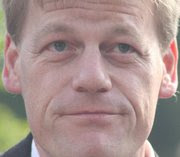 I first got to know Colin through playing football. We were team mates in the intramural 6-a-side competition for a few years. He also took part in the IS mile races that I organised every couple of months. I'd met his wife and kids at Kathy McCabe's home a couple of times. The Sinclairs and the McCabes are close friends and neighbours. Colin was someone that everybody immediately warmed to. He was a devout family man with a great sense of humour. Like Kathy, he also managed a team in Information Services. I dated a woman from his team for a few months, and she thought the world of him. Ruth had met Colin a couple of times at social events, and she too took a shine to him.

It was a great disappointment to discover that Colin is a liar.

In 2008, Kathy and I attended mediation. Colin attended in support of Kathy, and Ruth attended to provide support for me. The mediator had instructed us to prepare a statement that we were to read to each other, followed by questions we were to ask each other. We both read our statements. In my statement I mentioned that Kathy had been dishonest with me at work. She didn't like that. She demanded that I withdraw it. I wouldn't. I asked her if she would like examples of her dishonesty. She didn't. She went on and on and on about how honest she was. She said that honesty went to the core of her very being. Colin chipped in and said that Kathy was one of the most honest people he had ever known. I genuinely believed that he meant it.

Colin was interviewed as part of the grievance investigation. He was asked if Kathy answered my questions, and he said she did. At the end of his interview he falsely states that whenever he asked me for help, I would tell him I was too busy. His library computer system was running at snail pace for a while. He had been in regular contact with the suppliers who were contracted to fix such problems, but they didn't fix it. When he told me about it, I fixed it right away in my own time, even though it wasn't my job to do so.

You can see from the correspondence between the mediator and me just three weeks after the mediation that Kathy neither asked nor answered questions. Colin's statement is below. There's also an email from his colleague thanking me for fixing his system just two days before mediation. 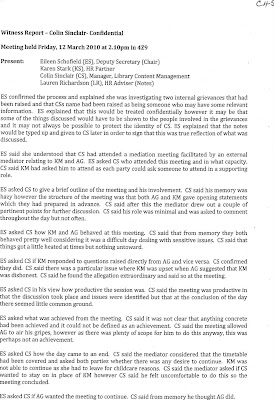 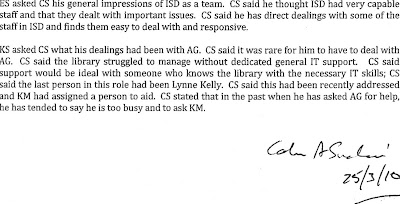 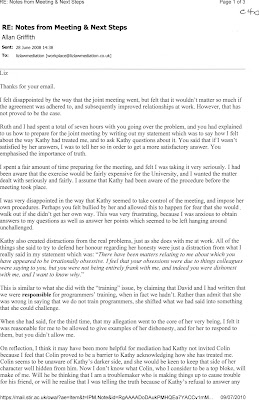 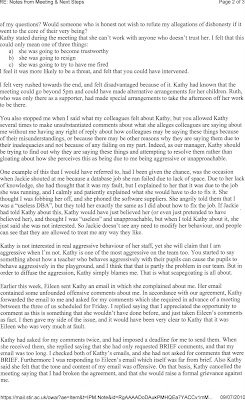 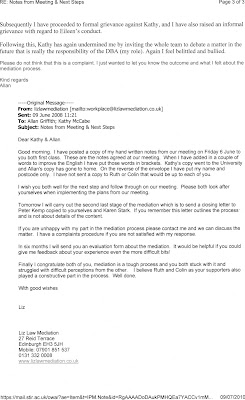 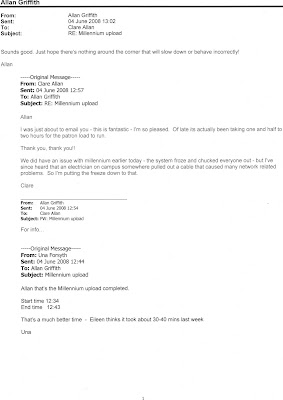