The Never Ending Cover Up... 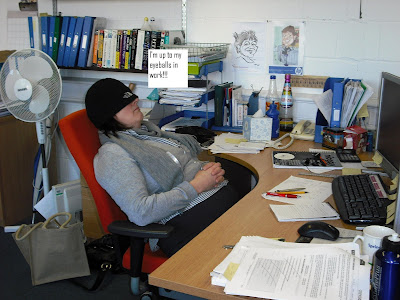 Stirling University has gone to extraordinary lengths to cover up an incident that happened on 10 March 2010 when Jackie O'Neil screamed at me and slammed her hand down on her desk in anger in an office containing about ten witnesses.

She had mistakenly thought that I had not carried out an instruction that she had given me before she began upgrading the student records system. Her upgrade failed, but not because of any error on my part, but due to her own error in not giving me another instruction from the instructions she was provided by the system suppliers, Tribal Group. My colleague, David Black and I quickly got the database back to a position where Jackie could restart the upgrade.

Jackie was supposed to ask me to increase the amount of space within the database, but didn't. She did ask me to ensure that the upgrade wouldn't cause the computer's disk to fill up with log files, and I did so, and I confirmed this in an email to her before she started her upgrade.

On 18 March 2010, in the presence of David Black, I informed our manager, Kathy McCabe about the incident. I then followed it up with an email to Kathy in which I indicate that the error was due to Jackie not giving me the instruction.

Kathy passed my email to Mark Toole. Mark said he would arrange a meeting for me and Jackie to discuss the matter, and I accepted. However, Mark decided instead to carry out a sham disciplinary process against me, and told me that Jackie didn't want to attend a meeting with me. A massive cover up had begun.

Jackie was interviewed on 21 April 2010 and gave a false account of the incident. She blamed me for the upgrade failure and denied screaming at me. Obviously she was lying, but Mark Toole knew that and ignored my pleas for him to ask David Black what happened. She also claimed that I hadn't replied to her request to ensure that log files wouldn't fill the computer disk.

At my disciplinary hearing on 17 June 2010, I told him about the instructions that would show him that Jackie hadn't given me the instruction to increase the size of the database. I also showed him my email to Jackie confirming that log files wouldn't be created by the upgrade. Of course, he ignored that too. On 25 June 2010, I was dismissed.

On 16 August 2010, I wrote to Karen Stark to request a copy of the instructions. I got no reply. On the same day, at my appeal hearing, I asked Martin McCrindle for a copy, and he said he'd send them on to me. He didn't.

On 6 September 2010, I wrote to McCrindle asking again for a copy. No answer.

On 19 December 2011, I phoned Tribal Group at Hessle to obtain a copy. A couple of days later, I phoned again, and was told that HE Director, John Gledhill had given instructions to his staff that I was not to receive a copy of the document I required without a court order.

On 21 December 2011, I asked the tribunal to issue them with an order to disclose that document. The university now objects to any order saying "We believe that we have complied with the claimant's request, in that we have furnished him with the copy of the instructions used."

Stirling University is claiming that my dismissal was fair. The lying bastards are determined that I don't even get a fair hearing at the tribunal.
Posted by Allan at 10:24