Eileen MacDonald - The Power of Gossip

The person I fear most at the forthcoming Employment Tribunal hearing is Eileen MacDonald. Eileen seems to have some magical or hypnotic ability to persuade people that she is somehow the victim, when in fact she is the perpetrator. That alone would be an extraordinary ability, but she somehow manages to do it, despite an abundance of evidence to the contrary. It's almost as though she is able to manipulate the part of the brain that normally processes facts, so that it can only process and consider emotion. And she has managed to do this with so many people, that I fear that she could do it with the members of the tribunal. I'm the only person I know of that her special powers don't work on. It's as though my fact processor refuses to be sidetracked my emotion. No amount of emotion will make my brain think that two plus two is anything other than four. I'm hard wired to think logically, and I can only hope that the tribunal members are too.

Here are the facts; Eileen is a compulsive liar who was jealous of me. She used her powers of gossip to persuade others to think badly of me. It appears that people believed whatever she said, including our manager, Kathy McCabe. Eileen told Kathy another whopper, and although Kathy believed it, she asked Eileen to put it in writing, so that she could hit me right between the eyes with it. I replied to Kathy with the facts. Kathy didn't like the facts, so she cancelled the meeting she had arranged with Eileen and me. I thought it was well overdue for Eileen to face the facts, so I lodged a grievance against her. At the same time, I lodged a grievance against Kathy, because she should not have cancelled that meeting. Instead she should have done what she was paid to do, and manage a very difficult team member that she had recruited. That is a fact too.

What seems to have happened is that the university's responsibility to handle my grievance within a reasonable time, was put to one side while all and sundry provided emotional support for Eileen. As a result, the facts of the matter were all ignored, and everybody's energy was used to paint me as the baddie who had upset a pregnant colleague. The fact that Eileen had got herself in this mess by gossiping about me, seems to have got lost somewhere among the emotional camouflage.

Below is an email Eileen sent to Kathy about her situation. This was about seven months after I lodged my grievance. While all the King's horses and all the King's men were running around providing more and more support for Eileen, nobody was giving a damn about the fact that I was Eileen's victim. I lodged those grievances just a few weeks after a five week period of sick leave due to stress.

In the end, Eileen tells another pack lies, Mark Toole who also ignored my grievance against Eileen says he believes Eileen's malicious complaint because he cannot think of any reason why she should lie. He doesn't bother looking at the evidence, or try to explain how it could possibly be true. He will have to explain to the tribunal how it could be more likely to be true than false. That will be impossible!

I find it quite extraordinary that so many people should wish to provide support for someone who would make up malicious lies in an attempt to deprive someone of their career. One of the strangest things is that I had shown Lynn McDonald evidence that Eileen had lied. So why on earth would she then provide support to her to get her through the summer? Lynn was one of the people I thought I could trust.

At the tribunal, I intend to show Eileen her statement, and then I will show her the evidence that proves that she lied. Following the hearing, I will publish the proof here. 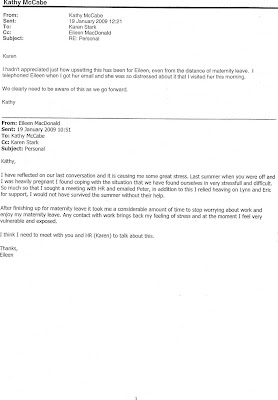 If Eileen was feeling vulnerable and exposed two and a half year ago, it is possible that she will feel even more vulnerable and exposed at the tribunal. It's almost three and a half years since I lodged my grievance. The grievance procedure says it should have been handled within three weeks. I think that soon it will finally be heard. That's unless Eileen 'Houdini' MacDonald can somehow wriggle out of it again.

For years Eileen had been making up lies about me because she was jealous of me being good at my job, and because colleagues recognised me as being good at my job. Eileen would frequently ask me to do her work for her, because she couldn't do it. And like the mug I am, I did it. And while I did it, she was off gossiping about me behind my back. Of course, when she was cowardly lying about me behind my back, I couldn't defend myself. Then when I saw her email to Kathy, I was prevented from defending myself. Then when she made her false statements, I was prevented from defending myself again. Finally, I'm going to have my chance to defend myself and to confront her with the indisputable facts. Justice has been a long time coming, but it will sure taste sweet.

Eileen MacDonald declared war on me. She is going to wish she hadn't bothered.
Posted by Allan at 08:59